In Vietnam, we visited the Mekong Delta. A delta is an area where a river flows out to the sea in many smaller channels. As the smaller rivers spread out from their source, they often make the shape of a fan. Some famous deltas include the Mississippi River Delta and the Nile Delta (in Egypt).
Deltas are important to the surrounding areas, because they are ideal for growing crops. The land is flat, and rich sediment, or very small pieces of earth, is carried from further upstream and deposited in the delta, making it very fertile. Fertile means that plants can be easily grown. The Mekong River picks up nutrients from China, Burma, Laos, Thailand and Cambodia as it flows down from the Himalayas.n the Mekong Delta, the primary crop is rice. Rice is the main source of income for many rural families – and most Vietnamese people live in the countryside. In central Vietnam, farmers keep much of their rice to feed their families, and may be able to sell about 1/3 of their crop. But in fertile areas like the Mekong, farmers produce much more rice, and can sell as much as 3/4 of their crop.In fact, Vietnam is able to grow so much rice, especially in the Mekong Delta, that it makes enough to both feed the country and export rice to other countries, too. (And the Vietnamese eat a LOT of rice — rice paper, rice noodles, and plain old rice!)
As far as exports, Vietnam is the second largest exporter of rice, after Thailand. Other countries, such as India and China, produce more rice, but don’t export as much as Vietnam.
Rice is so important in Vietnamese life, and to the Vietnamese economy, that the Vietnamese word for rice (‘com’) also can mean ‘meal’, and even can be used to mean ‘wife’.

How are Rice Noodles Made?
The rice noodle factory wasn’t quite what we expected – when we heard the word ‘factory’, we expected a big building with lots of machines. This ‘factory’ is all outdoors, and almost everything’s done by hand, with the help of a mixer and a device for cutting the noodles. They start work at 5 in the morning, and end at 11 a.m. — because later in the day, it’s too hot to work, especially because part of the work is done over a fire. Here’s an overview of how rice noodles are made:

1. The rice needs to soak in water for a day.

2. The rice water sits in bags, and as the water drains out, the rice congeals or forms into clumps.

3. The clumps are mixed with potato flour and water in a mixer. 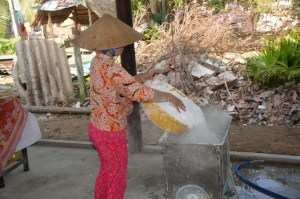 Rice clumps mixed with potato flour and water in this machine

4. The mixture is ladled out onto a cotton cloth, which is stretched over boiling water. The steam from the water cooks the rice mixture (kind of like a crepe or flat pancake). The water is boiled over a fire — and the fire is fueled by rice husks, so every part of the rice is used in the process. 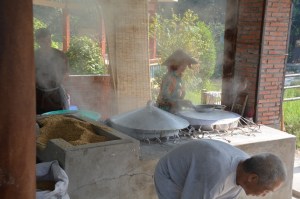 5. The flat rice pancakes are pulled off the cloth with a bamboo pole, and dried on a bamboo mat for 4 to 5 hours. 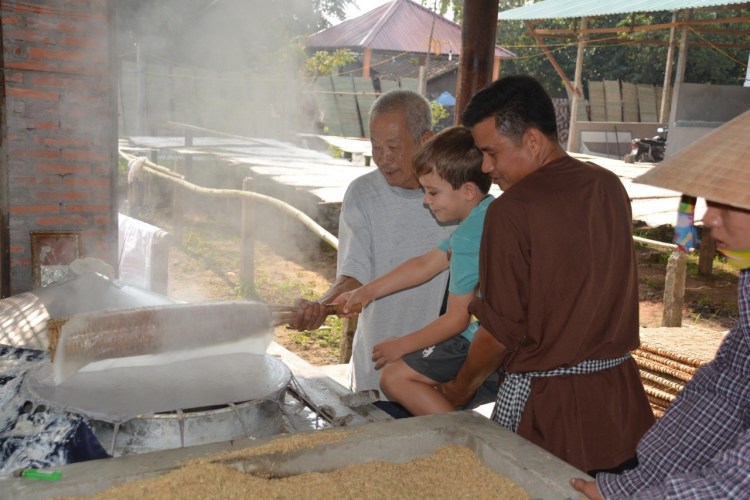 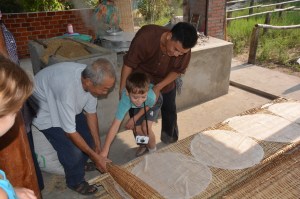 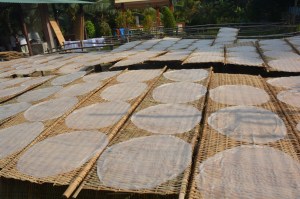 Rice pancakes drying in the sun

6. The sheets are then cut with a machine to make rice noodles, and packaged for sale. (Now, they use a device to cut the noodles; they used to be cut by hand!) 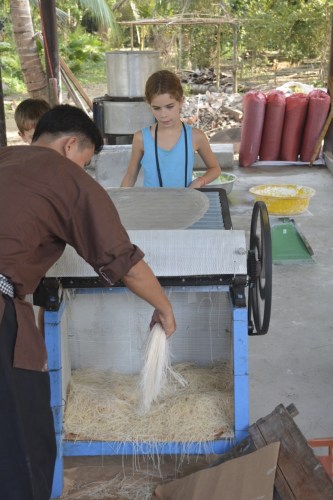